The December-January period sees the highest rate of people requiring emergency transportation due to acute alcohol intoxication within the jurisdiction of the Tokyo Fire Department. This is due to the occurrence of parties and functions that are customary in Japan during this season, such as year-end parties and New Year’s parties.

Among both men and women, people in their 20s are the most likely to require emergency transportation. Among men, the next-highest rate belongs to those aged 60 and over. Among women, it is those in their 30s. When drinking in a group, it is also important to pay attention so as to ensure that the people who are drinking with you are consuming alcohol in moderation.

Also, ever year, 600 young people under the age of 20 require emergency transportation. It is up to guardians and people in leadership roles to teach them not to consume alcohol. 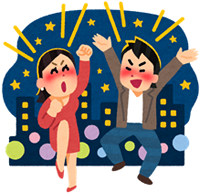 (1) Know what a safe amount is for you, and be aware of your physical condition that day.

(2) Avoid drinking a large quantity of alcohol in a short period of time (“chugging”).

(3) Do not pressure others to drink alcohol.

(4) If someone with you is drunk, stay with them. Do not leave them alone.

(5) If a drunk person has vomited, make sure their throat is not blocked. 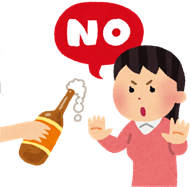 If you believe that someone is in danger, dial 119 to call an ambulance.

Click here to learn about
calling 119
(Service in English is available.)